(part 6) TAKE THE MONEY AND RUN 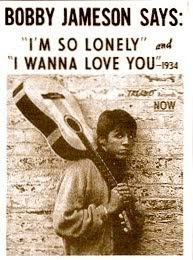 My record "I'm So Lonely" was a full blown hit in Cleveland and Detroit. So naturally Tony started booking me as the guest star at some big shows. I opened for The Beach Boys, Jan and Dean, and Chubby Checker, who at the time were all successful acts. I was never paid one penny for any of the live shows I did. Tony always told me that they were just promotion, and I was doing them for the exposure and to push record sales. Hell the record was in the top 5 all over the mid-west, why did I have to do free promotional gigs?

Of course looking back on it now, I realize Tony was getting paid, he just wasn't paying me. Once again, I believed what Tony told me. I was 19 years old and this man had changed my life. It is far easier now to see the truth than it was for me at that time. It was during this period of working hard that Tony first introduced me to the dexedrine, which I have already mentioned. The point was to keep me going no matter what. Keep the train moving. Don't let a little thing like being exhausted get in the way.

I was flying around on airplanes and riding in limos. I barely knew what city I was in most of the time. The haze began to be my everyday life, and the use of pills to get up and pot and booze to come down had become routine. Not only was I doing these live shows and not getting paid, but Tony was booking me all over the country, and in parts of Europe, with no intention of ever having me show up. He'd book me, get the front money and that was that. I did not find out about this until some time later.

One of the giveaways to this was when I was doing a live interview, by telephone, with a Cincinnati, Ohio radio station, where people called in to talk to me. The trouble was that everybody was pissed off at me and finally I asked why? "Are you kidding me?" the DJ asked, "No!" I said, "Why are you people so mad at me?" The DJ answered, "Because a couple of weeks ago the mayor of Cincinnati and 1100 kids waited at the airport for you in the rain. They were there with the key to the city and you never showed up."

It was like being slapped with a rope across the face. "I gotta tell you man," I said, "this is the first time I've even heard about it." There was silence for a moment at the other end of the line. "Are you telling us, because there's a lot of people listening to this show Bobby," he said, "Are you saying that right now is the first you've heard about this airport thing?" "Yes! That's what I'm saying. I didn't know anything about it or I would have been there, period. I feel awful, I don't know what else to tell you. I just wouldn't do that If I knew, I just wouldn't do that." The interview ended and I could not believe that what had just happened actually happened.

What the hell was Tony doing? It was my name getting trashed, but it was Tony Alamo's plan. I began wondering how much of this was going on? If I didn't know about Cincinnati, what else didn't I know? I begged Tony to tell me what was going on. I also insisted that he get me a band to work with on the road. I told him how hard it was to go on stage by myself and perform over and over again without backup. "They love you!" he said, "You don't need a band. You're better when you're alone. A band would just take the focus off of you and you're the star. You don't need a band."

On and on it went. I could never get what I needed. I'd just show up and play, until I started screwing up. That was a big deal! That was different! Tony had never seen me foul up while playing. It just hadn't happened, ever, until it happened. He changed his tune a bit. "Well maybe a band is not such a bad idea, let me work on it." I never got a band. What Tony did was to start asking guys from other bands, who were playing at the same shows to play with me. A lot of them were glad to do it and that's how it went. Tony always avoiding laying out cash for anything. Always getting someone else to do the work while he collected the money.

In case the point hasn't been made enough, let me be absolutely clear here. I was not paid one red cent for doing any of the things I have discussed here. "I'm So Lonely" sold a lot of records. I was told by the distributor in Detroit that the only record that he'd seen do better was Del Shannon's "Run Away". I am not saying "I'm So Lonely" was a mega-hit I'm just saying it sold a lot of records. There were other people who did more shows than I did, but I imagine they were paid something, at least I hope so. But I am still of the belief that Tony Alamo owes me money for what I did. Do I believe I will ever get it? No! I know Tony too well.