The record came out, "All I Want Is My Baby/Each And Every Day" preceded by a lot of promotion. I'll give Andrew Oldham and Decca UK their due, they pumped the record hard, but that made it worse for me personally because I had no faith in it. I felt like, "Oh no! You're not goin' to put that out are you?"

When I was doing "I'm So Lonely" at least I believed in it. But this was entirely different. All of a sudden I was doing interview after interview and I didn't even like the record. I was torn between the hype and the fear that it would bomb, which it did. I kept trying to get to see Andrew, but it was no use, he was not talking to me.

I started making up things about myself to deflect the interest in me, but it just seemed to make things worse. I took to wearing one "black glove" as a goof, and it got famous. I did a story with a London newspaper on "the Glove," which it became known as, and people took it seriously.

Somewhere during this time frame I had a visit from Brian Jones, and we liked each other right off. He came by my place one afternoon and we just talked about a lot of things. He was intelligent and sensitive and did seem taken by his own fame. He told me about his passion for animals as we sat together smoking hash in my flat. We spent the afternoon hanging out for the most part.

A year later by some quirk of the universe, Brian's picture would end up as the photo on the cover of the Chris Lucey album "Songs Of Protest And Anti Protest," which I wrote and recorded when I went back to America in 1965. I did not speak to Brian again, but have always remembered the day we spent together. I consider myself lucky to have had that time with him, and it is those kinds of moments from my past that I hold on to. They are some of the things that made it all worthwhile in the long run.

As the publicity increased, I was introduced to a very popular club in London called "The Ad lib Club," where everyone who was anyone went at night. It was the "In Place" in 1964 and I was like the "American Pop Prop" along with P J Proby, so it was easy to mingle with just about everyone.

I used to sit at the little tables that lined the walls of the place and drink Mateuse wine with the Beatles. Every time John Lennon saw me he'd say. "Eh, here comes "The Glove." Hey Jameson whot's wrong with yer hand mon, do ya ave a diseese or somethin?" I think he got a big kick outta doin' that because he did it a lot. It was a trip sitting there with The Beatles at 19 years old because I was a huge fan. So now here I was in London sitting right there with them and having John make fun of the glove thing.

I was getting the star treatment alright, but underneath the outward appearances I was just plain worried about having to go on British television to lip sync the record. In my gut I knew it was gonna be bad, but when it actually happened it was worse. I tried everything I could think of to get people to reconsider what they were doing. I told them all "Let's do the other side, "Each And Every Day," it's a better record.""No!" they said, "We're not going to do that Bobby, it's gonna be fine." It was not fine. It was a disaster.

Have you ever been around people when they've convinced themselves of something, even though they're wrong? Well that's the way this was. For whatever reason, and to this day I still don't know why, everybody was just locked into Andrew's track record and believed if Andrew said it was good, it was good, whether it was or not.

So the day finally came and I told Peter I hated the goddamn record and wished I'd never heard it or worked on it. He kept telling me it would be OK, and I remember listening to him and trying to believe it myself at that point. I mean what the hell was I supposed to do? I was gonna be mouthing this thing live on TV whether I wanted to or not, so I tried to get with the program and give it my best shot.

The trouble with a pre-recorded dud is that it's still a dud, even if you give it your best shot. I remember the announcer on either "Thank Your Lucky Stars" or "Ready Steady Go" saying, "and our next guest, all the way from America, is Bobby Jameson singing his hit record "All I Want Is My Baby." As the music started I was directed by someone to move out on the floor into camera range and walk slowly through a visual set while lip syncing the song.

Good Luck! I had no idea which way he wanted me to go. I kept watching the guy directing me and forgetting the words of the song. I still didn't have the lyrics down pat, so I didn't remember where to come in with the vocal. I just kept screwing it up and knew it as it was happening.

I had never been in that position before. I always knew where the song was, but not this time. This wasn't my song and it wasn't me. It was forced, and I could hear it as I tried desperately to find my place. I sleep walked my way through the rest of the song feeling ashamed deep down inside. I don't recall anything after that. Not leaving or speaking to anyone. 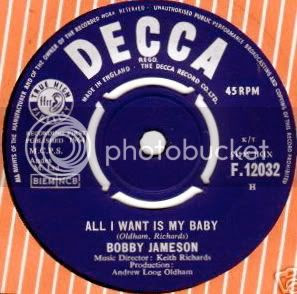