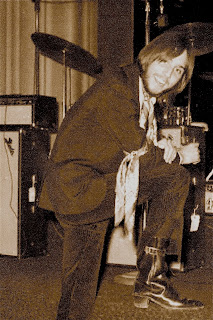 The war in Vietnam was really starting to get out of control in 1966 and I was scheduled to be drafted into the army at any moment. There I was trying to get my life to make sense while worrying about getting sent to Vietnam. The "Monkees" thing was still on and I was trying to get over being in my first major drug bust which was as fresh as wet paint in my mind.

I had to sit in jail for 3 days thinking my life was as good as over, when out of nowhere I was just kicked loose without explanation. To this day I'm not sure what happened, but I figure the police had done something wrong, like not getting a search warrant, or violating some other provision of law.

LSD had been legal, but somewhere along the line in 65 they had written new legislation and I guess it kicked in sometime in 1966. I learned to pay far more attention to things like that after my arrest. Everybody heard about it, but because I was out on the street and it was the 60's, it didn't cause that much trouble. What I'm saying is that I was not avoided by anybody or blacklisted because of it. It didn't effect my position for example as a possible "Monkee".

My draft date came and I was ordered to show up at the draft board to be inducted into the military. I had no choice and I hadn't come up with any way to get out of it, so I just went there on the date specified. I stood out like a sore thumb and attracted negative attention from the wrong people as soon as I walked through the door.

"Well who the hell are you bright eyes, one of the Goddamn Beatles?" This was a question hurled at me, amongst others, as soon as I arrived. I tried to lose myself in the crowd, which was large, and not get noticed so much. I looked around at all these young guys of every color and description and it was not a pretty picture. Each one seemed to be terrified on the inside but trying hard to put the brave face on the outside.

I knew I was scared. Hell I didn't want to go to Vietnam, period. I thought I'd get shot or shoot someone on our side for ordering me around. I was as piss poor at following directions as anyone you've ever met. We were told to remove our clothes down to our underwear, and then got put through a bunch of arbitrary jumping-jacks for what purpose I don't know, maybe just humiliation.

It was real similar to what they'd done when I was arrested and booked for drugs. There didn't seem to be a lot of difference. I stood in line while some drill instructor screamed at us. I tried desperately to think up some way to get my ass out of this situation. I heard the guy who was doing all the yelling say, "Has anyone here been arrested in the last 6 months for narcotics?" I looked around the room and up and down the lines of some 300 or so guys and didn't see a single hand go up.

The whole room was silent and everybody else was doing the same thing I was. Looking around to see if anyone was stupid enough to raise their hand. "Me," I said, "I was arrested for drugs." All eyes turned toward me. "You what?" the D. I. screamed, "What the fuck makes you stupid enough to raise your Goddamned hand and admit to a chicken shit thing like that you asshole?"

I was scared but said, "You asked if anyone had been arrested and I had, so I told you." The Drill Instructor looked at me in utter disbelief. The whole room was completely silent. "Why you cowardly little shit. Do you see this yellow line on the floor asshole?" he screamed, "Yes Sir I do," I said, "Well I want you to follow that yellow line where ever it goes until you can't go any further, do you understand me?" he yelled, "Yes Sir," I said, "Well then move your ass and get out of my sight you goddamned little coward."

I pulled on my pants and hauled ass along the route of the yellow line. It went on for a long way and it was a big building in the crappy part of L.A. I went down halls and up a flight of stairs and down some more halls until it stopped outside the door of an office. I figured I was supposed to knock on the door so I did.

A voice yelled from inside for me to enter. I opened the door slowly and looked in. It was a tiny dark office with a desk and chair and that's about it. Behind the desk was another guy in uniform who ordered me inside. He had a similar personality to the guy who'd sent me there.

This schmuck wanted every detail about my arrest I could give him and was just plain pissed off at me. I filled him in on the details of my arrest and then he basically kicked my ass out and said I'd be notified by mail of the decision regarding my military status. That was it! I left the building and I was the only one who did as far as I know. Every one of those other guys was still there when I left. I have always wondered about it. Why I was out and they were in? I didn't know whether to be grateful or feel guilty.

Months later I received a letter from the government telling me that I had been reclassified as 1-Y. I didn't know what that meant so I found someone who did. I asked them what 1-Y meant and they said, "It's a National Security deferment." "Well what the fuck does that mean?" I asked, "It means if the Russians attack Long Beach the army will take you, otherwise you're out." "You mean I don't have to go to Vietnam?" I asked. "Right! You don't have to go to Vietnam."
Posted by Bobby Jameson at 10:05 PM