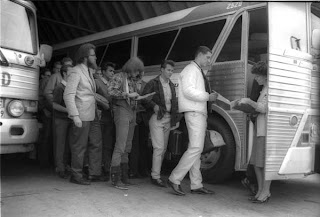 Each one of these posts, and the content, is written with a purpose. I do not talk about being busted, my drug use, or who was with me just for the hell of it. Each part played a critical role in what actually transpired in the scheme of things over time. For example. If I had not been busted for drugs I surely would have gone to Vietnam. The fact that Gail Sloatman, Franks eventual wife, was with me will again play a specific role in how things turned out.

I went back to Columbia to participate in the planning of the "Monkees" TV show. David Jones and I went with someone from Columbia to The Ashgrove, a folk club in Hollywood in the 60's. There was always new talent there so we went to scout out other potential "Monkee" candidates.

I was beginning to notice that what they expected of me was to be that shiny faced "pop star" personality that I had learned to dread in England. I had started growing a beard and my hair was getting longer and there were hints that they wanted me cleaned up.

It sounds like a small thing, but at the time I was extremely reluctant to once again be guided toward a personality that was not really my own. A lot of things had happened to me in the past couple of years and had changed me. I was not so trusting and naive as I had once been. For me it was a form of protection to decide for myself who I was rather than have that critical point determined by others.

This fact began to push and pull me in two different directions at the same time. I knew I would benefit in a lot of ways if I became one of the "Monkees" but I also felt that being true to myself at that point was of equal importance, at least to me if not to anybody else.

I spoke to Phil Turetsky about it because he had gotten me the original audition for "The Monkees." He didn't make a big deal about it, but in fact said he had someone else he wanted me to meet who was looking for a new artist who wrote and recorded their own songs. Phil said they wanted to make an album with that artist.

His name was Steve Clark and he had a production company called Our Productions. They'd had a hit with "The Association" and the song "And Then Along Comes Mary" which I was familiar with. He told me Steve had a genius kid he was working with named Curt Boettcher and thought I might get along with him real well.

A time was set up for me to meet with Clark at his office in the tower at Sunset Blvd. and Vine St. in Hollywood. I had a lot of songs at that point, because like I said, I had done a lot of writing at Zappa's house and the other house where the drug bust occurred.

Phil told me that Steve Clark would be as easy to get along with as anyone I'd ever met. This was a good thing, because I was having trouble with the endless personalities and egos of record executives and wanna be producers. I was leery at that point about who I met and how I'd react to them. I was, needless to say, somewhat edgier than I had been earlier.

I think at that point in my life I had a lot of frustration, anger, and disappointment bottled up inside me and was kind of a walking time bomb in the making. I used drugs and alcohol to steer myself in a particular direction. Drugs and alcohol were working for me at that point and had become a prominent part of my new personality.

I have to remind myself, and possibly the reader, that this was the 60's. Everything was alive and electric. Things moved at a ridiculously fast pace. For a growing number of people, drugs were not negative. They were part of the mind alteration and new philosophy of social understanding. Drugs were part of the mind expansion and new sense of freedom that was sweeping across America and the world, and I was determined, in my mind, to be at the front of the battle lines.

These brave words nearly killed me in the end, but at the time they were deeply and sincerely felt by myself and an ever growing number of others world wide. I still believe that the 60's did more to change the world than anything I have ever seen or heard about. I'm sure there are those who would agree, but believe that most of those changes were negative.

Even though I was as much a victim as a survivor of those times, I believe I learned some of my most important lessons from those years. Even now, I am looking for the kind of openness and peace that many pursued in earnest back then. The world would be a far better place than it has become with a whole lot more peace and love than exists today.

Hippie girls, for me, were the loviest creatures I ever met. Every now and then I see someone who looks like that picture in my mind and I am instantly returned to the Sunset Strip, Griffith Park, and the 60's.
Posted by Bobby Jameson at 11:16 PM