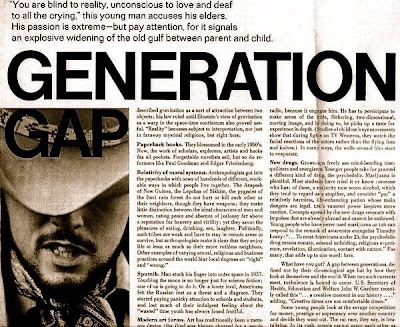 This picture is from a 1967 article in Look Magazine titled "The Generation Gap" by John Poppy. It was brought on by the ever increasing and violent street demonstrations against the Vietnam War and police crackdowns on demonstrators who felt it was their duty and right to take to the streets of Hollywood and West Hollywood and voice their disapproval.

The 60's was a mixture of contradictions and wonderment. Incredible music, drugs, social change, and a whole host of other dynamics that altered America and the rest of the world. I was not just some doped up pop singer that went around causing trouble. I was very serious about my quest to become spiritually enlightened, as were countless others.

It is far easier now to pass judgement on the use of drugs to find God than it was in 1967. All that we did at that time had purpose and meaning to us in our search for a better world. Better than the one our parents had helped to build. We clashed with every moral wall set up by older people and were determined to knock them down and erect something better and wiser.

We could not, and would not, accept the assassination of John Kennedy, Martin Luther King (1968) and Robert Kennedy (1968) at face value. We knew there was, and still is, more to those stories than we were ever told. We believed that the war in Vietnam was an example of people who had lost their way and were now dead set on forcing us to fall in line, which we did not.

The government of the United States lied to the nation about The Gulf Of Tonkin, much the same way as President Bush and Dick Cheney, lied about Iraq. This kind of course reality was what we faced in the 60's, and our decision was to take to the streets of America, and utterly refuse to permit it without a fight.

It would do some of you a lot of good today to be as committed as we were then. "He Who Will Not Question Authority Will Be It's Victim." We, as a nation, are now victims of our own weakness and self seeking. More than anything else the 60's was a time to learn. We lifted ourselves above the status quo and stayed there, willing if necessary, to be jailed, beaten, and even killed, Kent State (1970).

The fact that many of us became victims of our own enthusiasm is only clear now in hindsight. Even though, I still believe that what we did had to be done, and was done, by children from the 1960's. Make Love Not War was more that a clever slogan. We did make love and not war. We loved the world and each other with music and art and we changed it.

Our fight was with those who doggedly kept up the lie about Vietnam and their bull crap morality. We understood morality to be something more than talking about patriotism while killing people in Asia. Morality meant far more to us than discussions about out of wedlock sex. It seems clear to me, that we as a people, and a nation, have once again slid back into talking about morality while blowing up a country and it's people for the same kind of reasons that we fought in Vietnam.

The 60's in so many ways is the text book lesson against the war in Iraq. The rhetoric about what will happen if we leave is identical to what was repeated over and over from 1965 to 1974 regarding Vietnam. If I never do anything worthwhile in my life again, I will always remember and cherish the children of the 60's, and know that I was one of them.
Posted by Bobby Jameson at 4:43 PM