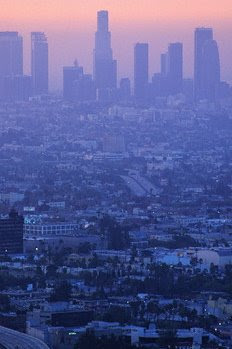 My view from the tower at dawn

I was like an automaton marching forward through the streets of Hollywood that cold dawn. My singular focus was to climb that tower. I recall dismissing any thought to the contrary.

As I had done, while marching toward the Continental Hotel, I watched my feet tracking the ground toward my destination. With machine-like precision my body responded without question to the orders given it by my mind. I was ordered to take the tower in almost military terms.

I approached the backside of the Pacific Theater and surveyed the area, looking for a way upward. I came to a small alley that poked it's way into the building's structure with a steel staircase that led to the roof.

As I made my way forward, I reached the top of the fire escape stairs and was there. The twin towers stood majestically before me reaching upward into the growing daylight of the Hollywood sky.

They looked a lot bigger and taller than they had from a distance. I stood at the steel base of the closest one, and realized there was no easy way to get up. There was a single story utility shack next to the first of the two towers, so I picked that one to scale.

To get on the roof of the shack I had to climb on a wooden box and pull myself up. I moved to the edge of it's roof and got as close as I could to the tower. Once there it was about eight feet to the lowest crossbeam, so I jumped to it from the shack's roof. I remember how cold the steel felt when I grabbed it with both hands.

I hung there for a moment like a kid on a monkey bar. I began to shimmy my way sideways to the large outer vertical leg of the tower. Then I was able to use the horizontal and vertical connections, between those pieces of steel, to leverage my way up into a sitting position on the lowest crossbeam of the structure.

During this procedure I was engaged by a security guard who yelled at me saying, "You're not supposed to be up here," which I ignored. He then turned and disappeared through a doorway leading into the building's interior.

I sat on the crossbeam for some time, gazing out at Hollywood's skyline and L.A.'s vast expanse in the distance. I pulled a pint bottle of scotch out of my inside coat pocket and took a long drink. It burned my mouth and throat on the way down, but quickly and mercifully warmed my chilled body as I clung to the cold steel of the tower.

It was still early, and Hollywood Blvd. was virtually deserted. I looked east and then west from my position, while surveying the situation. I checked with myself to see if my plan had changed now that I was actually sitting on the tower instead of looking at it from blocks away.

"No!" The plan had not changed. It was full steam ahead. I thought about my life and what a disappointment it had been. I thought about the record business and how many times I'd been fucked by it. My anger was so complete that it had become the propelling force within me. It had no alternative but to find a way out.

This tower! This moment! This life! I was now going to put on a show that no one would ever forget after today. While I thought about these things my body tightened like a steel cable anticipating my work ahead, the ascent of mount tower.

The climb toward the top; to get as close to God as I could, in hopes he could better hear me, crying out through my tears and rage, "Why has everything in my Goddamned life gone so wrong?"
Posted by Bobby Jameson at 9:11 PM