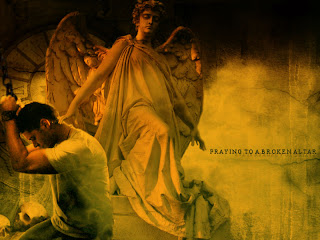 Step 1, Admit defeat, and to being powerless over the thing which is causing you trouble, such as alcohol and/or drugs. Further admit that the management of your life, while engaged in this troublesome behavior, is failing.

Step 2, Come to an understanding and belief that some power, spiritual in nature or not, can and will restore you to sanity regarding this behavior admitted to in the first step.

Step 3, Make a concrete and real life decision that you will relinquish yourself, both your will and your life, to this power described in step 2.

These three things were attempted by me initially, but became bastardized eventually by my unwillingness to accept defeat, believe in a power greater than my old self, and turn my will and my life over to the care of anything other than me, alcohol, and drugs.

My higher power was in fact drugs and booze. That was my main focus in life. I'd made getting loaded into my God, and was determined to maintain my right to glorify my chosen religion through the intake of substances.

I had always believed in God, and had always thought he cared about me, but some time during my previous eleven to twelve years, I'd come to believe that God had abandoned me, or possibly more precisely, I had abandoned God.

Prior to going to England in 1964 in an attempt to get away from Tony Alamo, I'd had a sense of deep spiritual connection to the Universe, but I altered my destiny by suddenly leaving America to engage with Andrew Oldham and Mick Jagger, and that sense of deep connection was changed.

The connection didn't vanish, it was just different. When I came back to America in 1965, I was not the same. I'd lost something I'd once possessed, and I tried desperately for the next ten years to reclaim it.

The use of LSD, and other substances, were no equal for what I'd felt naturally at 19 years old. But drugs and alcohol became for me, the new doorway to the unknown secrets I'd heard about and read about.

The simple and straight forward belief I'd had, was never recaptured or crystalized through the use of drugs, any drug.

Somewhere along the line, the use of those drugs had caused me to sink into darkness rather than rise into the light of clear thinking. Somehow, I had lost my way rather than found it.

So now here I was, lost and angry, and completely unwilling to embark wholeheartedly on a new way of life. Rather, I held to the past, and all that had failed me, in a stubborn fit of destructive and shortsighted behavior.

Gone was any sense of real purpose, other than to prove to the world that I could endure the endless pain and misery I seemed to create for myself through using.

Now I was more like a machine than a person, fueled by alcohol and drugs, and ever more determined to clash with everything and everyone I encountered.

Buried in the deep recesses of my memory was the big eyed boy who wanted only to sing songs and taste life to it's fullest. Buried too, was the true creative force I'd always relied on and used for inspiration and direction in deciding my next step in life.

This blank and dark room of no man's land became my domain, a place where tears were mistaken for laughter, and love traded for cruelty.

This was my altar, my church of sadness. A place of believing in nothing more than the ruthless selfishness of addiction, self-pity, and all that comes with it.
Posted by Bobby Jameson at 9:00 PM