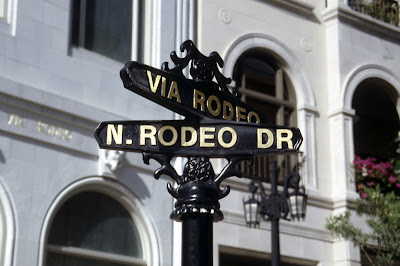 I suppose that as I write this story, some may think I'm "stuck" in an ever repeating rewrite of that which has already been stated and reiterated to death.

This, in some sense is true, but necessary, in that the story itself cannot go where one wishes, but where the story actually goes. The tedious nature of alcoholism and drug addiction is that they are centered in repetition and habitual tendency.

The tragedy is, that alcoholics and addicts are alcoholics and/or addicts because they are caught in the cycle of repeating a failure, which at one point worked for them, but now does not.

It was 1975, and I stood on the sidewalk in front of a very expensive jewelry store on Rodeo Dr. in Beverly Hills. It was 2:00 in the morning, and I figured that the cops would be out looking for drunk drivers who were leaving the bars for the night.

As usual, I was broke, and was determined to do something about it. I stared at the jewelry still sitting in the sidewalk showcase windows.

I carefully read the little signs at the bottom of those windows, which said that the glass was shatterproof and/or unbreakable. "Yeah" I muttered, "I bet I can break it." I went to the car and retrieved a large golf club from the trunk, it was Carol's car.

I don't know why I picked the golf club over the tire jack, but that's what I grabbed. I stood in front of the window and took one last look around. Nothing! There was no one on the street and no traffic.

I lifted the golf club above my shoulder, and swung it like a baseball bat at the first small window. It hit with a thud and barely left a mark.

This incensed me, when I saw that it had done little or no damage to the window. I stood back and took another swing, repeating the action several times.

Over and over I wildly swung at the window like a man possessed. The repeated blows slowly began to break apart the glass, and finally I managed to beat a hole in it about the size of my fist.

I shoved my hand through the opening, and began pulling out the contents, mostly watches. During this process I caught my wrist on a jagged shard of glass, ripping it open covering the area in blood.

I yanked out my hand and looked around again. It was then that I caught sight of a video camera above the entrance to the store, and noticed it was pointed directly at me, and had a tiny red light that was illuminated.

"Shit!" I said, as I turned back toward the car. With the bloody jewelry in one hand, and the now completely bent golf club in the other, I threw everything on the front seat and slid in behind the steering wheel.

My heart was pounding in my chest, as I kept saying, "OK, Bobby, be cool, and don't freak out. Just drive away calmly as if nothing is wrong." I knew I'd set off a silent alarm when I'd hit the window, so I expected the police at any moment.

I could now hear the sound of sirens filling the air from Wilshire Blvd. to Sunset, as they raced toward where I'd just been. I drove off slowly and deliberately on a side street, as if I had all the right in the world to be there.

It was difficult not to over react and drive faster, but I managed to keep my wits and stay focused, at least on the outside. Inside I felt like I was going to have a heart attack.

I headed east towards Hollywood, and managed to miss the police by about twenty or thirty seconds, as I vanished into the darker side streets of a residential part of Beverly Hills.

I knew people who bought stolen jewelry, because of DP. He'd introduced me to them in the past, so I figured I had a way to get some money quick.

Early that morning, I went to one of their houses in the hills and rang the doorbell. When the women I was looking for finally opened the door she said, "What the hell are you doing here so early in the morning, Bobby?"

"I got some stuff to sell," I said. "What kind of stuff?" she asked, half asleep and bleary eyed. "Jewelry," I said, "stolen jewelry." "Oh shit," came the reply, "get in here before somebody hears you."

I went inside and the door closed behind me. "You're nuts, Jameson. You know that?" "Yeah, yeah I'm crazy," I said, "so what! How much can I get for this shit?"

I dropped the jewelry on a coffee table in front of her. "Where'd you get this from anyway?" she asked. I told her where it came from and how I got it. She stared at me like I was from another planet, and shook her head.

"Come on," I said, "give me something. I need the fucking money." She stared at me sensing I was not gonna leave without something.